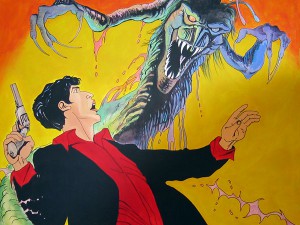 Dylan Dog is a penniless nightmare investigator who defies the whole preceding horror tradition with a vein of surrealism and an anti-bourgeois rhetoric. The true monsters in many of these stories are human beings. 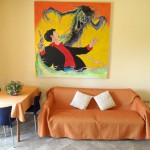 The series is mainly set in London, where the protagonist lives, though he occasionally travels elsewhere. His clothes are one of his defining characteristics: he always dresses the same way, in a red shirt, black jacket, and blue jeans. He bought twelve identical outfits after the death of his wife Lillie Connolly on the advice of Inspector Bloch, who was his superior when he worked at Scotland Yard and remains his father figure (Dylan calls him “Old boy”) even after Dylan struck out on his own to become a private investigator specializing in the supernatural. Inspector Bloch is one of the principal supporting characters in the series, together with his assistant (or rather, comic relief), Groucho, a punning double of Groucho Marx. 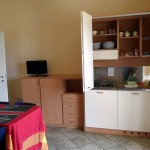 Dylan lives with Groucho at 7 Craven Road in a cluttered apartment with a doorbell that screams. His hobbies include playing the clarinet and constructing model ships; he has many phobias, including bats and heights (Acrophobia). Dylan is also particularly susceptible to motion sickness, which is one of the reasons why he rarely travels. Once an alcoholic, he now almost never drinks. He is a vegetarian. He’s also a hopeless romantic who loves and loses a new woman in nearly every issue.

The double room TIN TIN for only € 70 per night for who book at least three nights. Breakfast included in the price. Book now.