Spider-Man is a fictional superhero in the Marvel Comics Universe, created by writer Stan Lee and artist Steve Ditko. First appearing in “Amazing Fantasy #15” (Aug. 1962), he has become one of the world’s most popular, enduring and recognizable superheroes.

When Spider-Man first saw print in the 1960s, teenage characters in superhero comic books were usually sidekicks. The Spider-Man series broke ground by using ordinary teen alter ego Peter Parker, a character to which young readers could relate. Spider-Man has since appeared in various media including several animated and live action television series, syndicated newspaper comic strips and two highly successful movies, with a third set to debut in 2007. 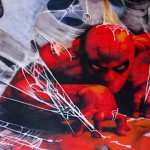 Marvel has published several Spider-Man comic book series, the first being “The Amazing Spider-Man”. Over the years, the Peter Parker character has developed from shy high school student to troubled college student to married professional.

Peter initially sets out to find fame and fortune, winning a match against professional wrestler Crusher Hogan. After quickly becoming a minor celebrity, Peter appears on a

television special, but afterward allows a thief to escape the TV station, asserting that it isn’t his problem. He comes to regret his inaction when he finds out the same burglar subsequently kills his Uncle Ben. Realizing that he could have prevented his uncle’s death, the guilt-ridden Peter commits to a life of crimefighting and lifesaving, driven by his uncle’s words, “With great power there must also come great responsibility.” This phrase (usually in the modified form, “With great power comes great responsibility”) subsequently became widely known. 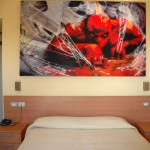 Unlike many other superhero comics, Spider-Man takes pains to give a somewhat realistic portrayal of how the world would react to a superpowered crime fighter. Peter tries to do the right thing but the authorities and the public tend to view him with suspicion. Thanks to a continuous smear campaign by J. Jonah Jameson, publisher of The Daily Bugle, many people consider Spider-Man a menace to society. Ironically, Peter spends much of his life working as a freelance photographer for Jameson, often selling photographs of himself as Spider-Man to be used in negative articles and editorials.